In our Literature class we’ve been analzying the poem “Evening in Paradise” from Paradise Lost by John Milton. With our Professor, Patricia Chujman, we created THIS slideshare in which we hace to answer some questiones. Here are mine! 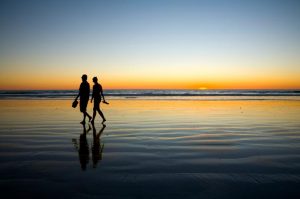 «The first 12 lines show an analogy between Evening and Paradise» Account for this.

«Now glowed the firmament with living Saphirs; […] Rising in clouded majesty» This extract shows how the author describes the evening with majestic words such as «saphirs» and «majesty», words proper of a paradise.

Find at least three literary devices and explain the imapct on the reader. Why are they used?

Is the scene just protrayed as a peaceful natural scene? Could this also be a funeral scene? Account for your answers.

In my opinion, it can be seen from both point of views, since an analogy is made. The peacful natural scene could be sleeping, that could also be accositaed with death. But, now, it depends on what do you think when you think about a funeral scene. Aren’t funerals natural scenes? I think that they completely are because we are all surely going to die so it’s natural. Aren’t funerals peaceful? In my opinion they also are, maybe the person that died was suffering from a horrible disease and now she is in rest, finally tranquil.

It all depends on you.